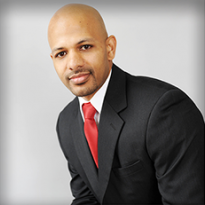 Attorney Dominique Wilson Williams is a diligent litigator who practices in the areas of personal injury, wrongful death, and criminal defense. He is experienced and effective in the courtroom and in negotiations.

Dominique graduated from North Carolina State University, where he received a Bachelor’s of Science in Business Management. Before pursuing his lifelong goal of becoming an attorney, he worked as a mortgage consultant for three years. Dominique received his law degree at North Carolina Central University School of Law, where he earned the honor of arguing before John Roberts, Chief Justice of the United States Supreme Court and Henry Frye, former Chief Justice of the North Carolina Supreme Court. He also served as President for the student chapter for the American Association of Justice at NCCU.

Dominique sharpened his trial skills as an intern with the Wake County North Carolina District Attorney’s office. He prides himself in being personable and approachable, and truly enjoys protecting those in need of competent legal representation.

Dominique approaches each and every case with the care and attention you expect and deserve.

How to handle medical expenses post a motorbike mishap?

Who is entitled to seek damages for demise in a car crash?

6 ways an attorney can assist you with Personal Injury claim

How to stay alert of a drunk driver